Home » A President Elect and a pineapple numbers discussion!

A President Elect and a pineapple numbers discussion!

Ahead of the American Presidential Election, some of my Year 6 pupils were discussing who would win. Freddie declared, rather confidently “If Donald Trump wins, I’ll give Mr Le Tissier a pineapple!” True to his word, on Thursday morning Freddie presented me with a pineapple.

In class I thought I would make good use of this unexpected offering. Writing on the board the sequence 1, 1, 2, 3, 5, 8, 13, 21, 34 and so on. The children were very quick to notice that the following number was the sum of the two previous numbers and I shared that this was called the Fibonacci Code. There were a few heads being scratched as to how this related to the pineapple… I then asked Freddie to count the rings around the pineapple and sure enough they were all Fibonacci numbers: 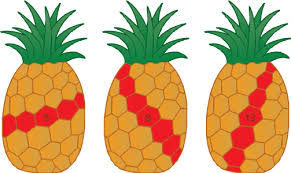 Later on in the day, while teaching science to a Year 5 class, they became intrigued as to why I had a pineapple on my desk… a fair question. During the lesson the children were using their scientific observation skills to examine fossils, rocks and minerals. The question was posed to the children “What does a pineapple and a fossil of a shell have in common?”, we discussed the Fibonacci code and the children were amazed to see the Fibonacci spiral throughout nature.

Some impromptu and fun cross-curricular learning… all thanks to the recent Presidential Election!