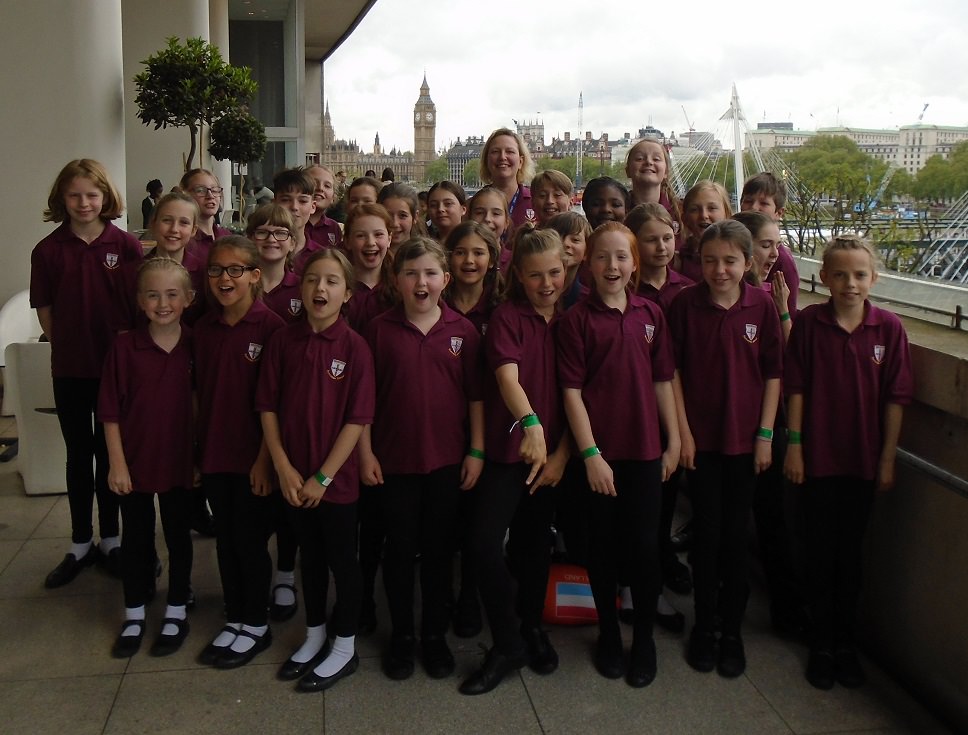 Duncombe Senior Choir performed at the Barnardo’s Young Supporters’ Concert at the prestigious Royal Festival Hall in London on May 18th.  A beautiful massed Choir concert of some 600 primary aged pupils, with dancing and solo performances thrown in.  As is tradition for these events, artwork is submitted in advance by the pupils attending and we are delighted to say that Sophie N. had her work chosen and resplendently displayed on all T-shirts worn. But it did not stop there; Duncombe Maddy P’s artwork was placed on the front cover of the Programme with artwork from Abby S, Maggie B, Florence D, Amelia G and Tilly C included throughout. The pupils sang exceptionally well and from 92 auditions from 21 different schools, Duncombe provided four soloists, Ross M, Abby S, Tilly C and Amber D. All sang with confidence and interviewed with the compere prior to singing which only added to our sense of awe regarding how well they each handled this.  Earlier Max M had been interviewed about the preparations for the event and spoke eloquently and with a lovely balance of confidence.  As one Year 6 parent wrote “I just wanted to drop you a note to say how much I enjoyed watching the children sing at the Royal Festival Hall last night.  The children were a credit to the school and what a fantastic experience for them.  A huge thank you to Mrs Welch and Mrs Turner for helping to make it happen.   In particular I was very impressed by the young soloists.  They sang beautifully and I was very impressed by their air of confidence and articulation when interviewed.  The school should be very proud of their achievements.”

Also Duncombe Year 4 Choir, have made it to the finals of The Lea Valley Junior Schools’ Choir Competition taking place The Spotlight, formerly Broxbourne Civic Hall on 26th May. Duncombe children will be singing ‘Now is now’ and ‘The Disco Beat’, conducted by Mrs Vanessa Welch, Music Team Leader and accompanied by Mrs Jane Turner, Music Coordinator. Mrs Welch said “The choir have been doing lots of rehearsal and are really excited to be performing on the big stage at The Spotlight”.

The judges for the competition are Derek Harrison, Musical Director for Hertford Choral, Deanne Tucker, Head of Music at John Warner School and Paul Burrell, Head of Music at Presdales School. Their decision on the winner will be announced at the end of the show which will also include performances by some outstanding local musicians.

Derek Harrison said ‘The standard of singing on the recordings was very high and it was good to see some new schools in this year’s final. We look forward to another excellent evening of School Choir singing’.

Participants will all receive certificates for taking part and other finalists are St Cross from Hoddesdon, Downfield from Cheshunt, St Mary’s C of E from Ware and Stapleford Primary School.